Opportunity to Build a Resilient, more Dynamic, and Prosperous Society lies Ahead of Us — Ken Ofori-Atta

Opportunity to Build a Resilient, more Dynamic, and Prosperous Society lies Ahead of Us — Ken Ofori-Atta

Sekondi, 2nd February, 2022 - Minister for Finance, Ken Ofori-Atta has stated that, the time had come for all well-meaning Ghanaians to support Government to build the resilient, dynamic, and prosperous society we all dream of.

He said this, when he addressed a cross-section of Ghanaians across the political divide at a Government Town Hall Meeting held at the Sekondi Youth Centre in the Western Region.

The Town hall meeting was a second in a series of nationwide public engagement rolled out by Government with the aim to generate support for the Electronic Transaction levy currently before Parliament.

According to the Minister, it was important for everybody as a citizen to have “a part in this enterprise of a Ghana that is confident, prosperous and leading the nation states of the world” 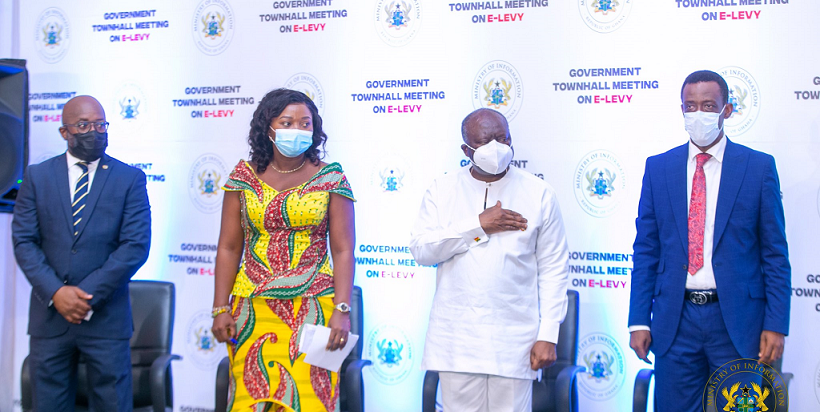 Touching on the need for Ghanaians to support the E-levy, he disclosed that, Government, prior to the Covid-19 pandemic had set all the economic indicators right for accelerated development and structural transformation.

“We went through 2017 to 2019 with incredibly stellar results on what we as a country achieved, moving from 3.4% of growth to an average of 7%; reducing our budget deficit from 6.5% into about 5%; making sure our currency did not depreciate as it used to be and its now quite stable; and also have the necessary foreign exchange cover to make sure that we are able to support our currency and our imports” Mr. Ofori-Atta stated.

He continued that “during this period, we did the impossible; we spent over GHS40 billion on education, GHS14 billion on healthcare, GHS14.9 billion on enhancing internal security, GHS18 billion on flagship project and it just continues as of the things we were able to do with money that the NDC were sure we would never be able to get”.

Mr. Ofori-Atta added that, due to prudent economic policies of the Government, about 1.26 million people had benefitted from free SHS; 3.45 million covered by school feeding program; and 100,000 young persons employed under NABCO, the largest in our history; and over 344 households given lifelines under the LEAP program.

The Minister for Finance noted that, because of Government’s timely interventions and programmes during the Covid-19 pandemic which included supporting households with free water, food, paying salaries of all Government workers during the lockdown, among others, the economy was faced with its most testing time.

“Given our elevated public debt stock due to the pandemic, our path forward in economic management has to prioritize domestic revenue mobilisation rather than borrowing to fund the budget” he reasoned.

Mr. Ofori-Atta disclosed that, the country needed to create its own viable economy, build infrastructure to become a regional infrastructural and investment hub which would bring opportunities and prosperity for all Ghanaians,

Asked for a dispassionate moment to build consensus around the E-levy.

The Western Regional Minister, Mr. Kwabena Okyere Darko-Mensah also used the opportunity to appeal to the people in the Region to support all government’s programmes and initiatives.

He indicated that, 62% of the population of Western Region was unemployed and so there was the need for all to support of the E-levy that had promised to bring employment opportunities when passed.

Hon. Justina Marigold Assan, the Central Regional Minister, on her part underscored the need for Ghanaians to generate enough revenue for their own development.

According to her, Government’s proactive interventions like goodies for Ghanaians during the pandemic, payment of salaries during the lockdown and the financial sector clean-up exercise were all in the good interest of Ghanaians.

She concluded that, the time had come for Government to find creative ways of generating the needed revenue to support the economy, hence the introduction of the E-levy that would ensure both the formal and informal sectors all contributed.

The Deputy Minister for Energy and Member of Parliament for Sekondi Constituency, Mr. Andrew Kofi Egyapa Mercer also stated that, the progress of the country lied in the hands of Ghanaians, hence the need to contribute to the development of the nation through the electronic levy initiative.

He said that the purpose of the E-levy town hall meeting was among other things to explain the transaction and address the misinformation, propaganda, and political twist the opposition party had put in the public space.