Accra, 26th November, 2021 - The Minister for Employment and Labour Relations, Hon. Ignatius Baffour Awuah, has urged the reconstituted Board of the National Pensions Regulatory Authority (NPRA) to speed up plans to deploy a long standing proposed Risk-Based Supervision (RBS) facility which will aid the Authority to undertake its mandate effectively.

To effectively manage the administrations of pensions, the Employment and Labour Relations Minister believed the RBS project would be a useful facility that will  assist NPRA in installing and configuring Microsoft Dynamics software for its operations. 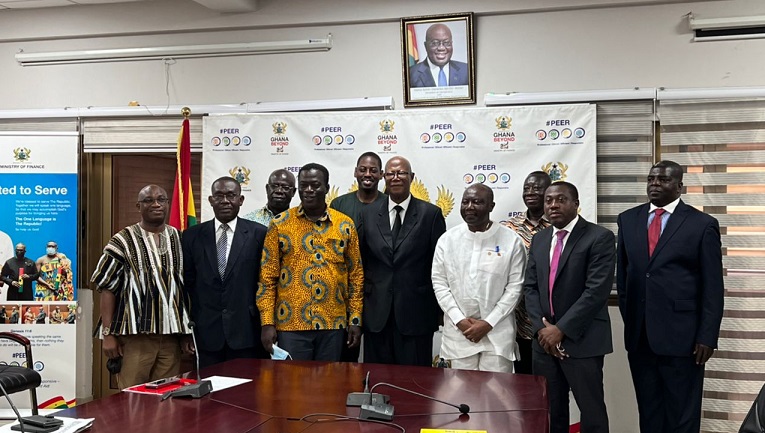 “This is to ensure a healthy pension system and Information and Communication Technology (ICT) systems to automate its regulatory functions”, Hon. Ignatious Baffour Awuah stated.

He was speaking at the inauguration of the reconstituted Board of Directors of NPRA in Accra. A programme he co-chaired with the Hon. Min. of Finance, Ken Ofori-Atta.

NPRA is the statutory body established by the National Pensions Act 2008 (Act 766). The Authority is mandated to regulate and ensure the effective administration of pensions in Ghana. The NPRA also supervises and regulates Social Security and National Insurance Trust (SSNIT).

Mr. Bafour Awuah believed that the RBS facility would help the Authority to improve its service delivery as well as to ensure effective compliance and regulatory rules and regulations within the industry.

“One area I have followed with keen interest is awareness creation, especially within the informal sector, to bring as many as possible Ghanaians onto one pension scheme or the other. I have, over the period, personally participated in the awareness creation activities of the Authority and have come to appreciate its successes and challenges”.

Available statistics have it that about twelve million people make the entire workforce in the country. Out of this, nine million are said to be in the informal sector. An estimated seven hundred thousand (700,000) out of the nine million representing eight percent (8%) is on one pension scheme or the other. It was on this backdrop that the Hon. Minister called on the Board to enhance awareness within the informal sector to increase the percentage of patrons on the scheme.

“The Board, therefore, has to work hard to help Management to increase the pensions coverage in the country. I do very much appreciate the commitment and dedication of Management and staff in planning to increase the figure to about 25 percent within the next five years as per their five-year development plan. The Board has to help push this laudable agenda that is in line with the vision of his Excellency, The President, Nana Addo Dankwa Akufo-Addo, to ensure the financial inclusion of every Ghanaian” he said.

On his part, the Minister of Finance, Ken Ofori-Atta, statisticaly indicated that at the end of 2020, the overall value of pension funds stood at GHS 33.4 billion (approx. 8.7% of GDP), a 61% improvement from GHS 20.8 billion in 2017.  He observed that, the previous Board oversaw growth in the number of active contributors to the Basic National Security Scheme (BNSS) from 1.5 million people in 2018 to roughly 1.63 million people.

“Furthermore, trend analysis of establishments enrolled on the mandatory BNSS provides evidence of steady progress recorded between 2017-2019, until the COVID-19 Pandemic led to a 10% decrease in the number of BNSS establishments”, he emphasized.

Mr. Ofori-Atta noted that, before the pandemic, industry indicators were trending in the right direction, however, the havocs of the pandemic on industries were obvious and thus asked “Therein lies the challenge to the newly constituted Board. How do we use the pandemic to secure stable growth across our pensions industry and leverage our pension assets to accelerate our structural development”?

According to the Global Infrastructure Hub survey, there was about $45 billion infrastructure gap to fill by 2040. “We need to create a supportive ecosystem that allows our pension funds to play a prominent role in funding sound and well-structured   projects with adequate risk-sharing agreements to allocate risks and provide security to institutional investors”, the Minitser noted.

He, therefore, urged the new board to bring new pragmatic ideas to help the Authority execute its five-year development plan starting next year, 2022.

“The role of digitalisation also cannot be overemphasized. As part of its duties, the Board must ensure NPRA leverages digital tools to advance efforts in increasing coverage of the informal sector”, Mr. Ofori Atta added.

The newly sworn-in, Boardchair, Mr. Paul Simon Mfodjo Koranteng in response to duty call proffered by the two Ministers, intimated that they would be guided by a five-year strategic plan.

“A lot has been achieved within the eleven years of the Authority and it is our duty to help build on these successes to move to greater heights of achievement. In so doing, we will be guided by the five-year strategic plan, which coincidentally commences its implementation at the time we are taking office”, he stated.

He said the Board has priotised to strengthen the Authority to enable it to exercise its regulatory functions by ensuring timely institutional capacity through automation and staff development.

To achieve this, he noted that there was a need for a continuous awareness creation and effective corporate branding. “We will have to do this bearing in mind the urgent need to provide the platform for every Ghanaian worker both in the formal and informal sector to retire decently and comfortably”, he expalined.

“The President and indeed the good people of this country, in general, expect a lot from us and we cannot afford to let them down. For example, I am aware that the pension coverage within the informal economy must be improved to provide opportunities for our hard-working Ghanaians in the informal sector to enjoy pension when they retire”, Mr Koranteng added.

He appealed to the Hon. Minister for Finance and Hon. Minister for Employment and Labour Relations to ensure that there are enabling conditions for informal sector pension contribution to continue with tax incentives.