Kasunya-Nyaphienya (GA) 9th December, 2022 - The President of the Republic of Ghana, Nana Addo Dankwa Akufo-Addo has launched the Economic Enclave Project (EEP) under the Ghana CARES programme at Noyaa Akutso in Kasunya-Nyaphienya, in the Greater Accra Region.

The Economic Enclave Project under the Ghana CARES programme is a 10,000-acre mixed-use economic space which seeks to create a viable ecosystem for private sector to engage in commercial farming.

The objective is to significantly expand Ghana’s productive capacity in rice, tomato, maize, soya, vegetables, and poultry. The EEP complements existing Government agriculture initiatives (e.g. Planting for Food and Jobs and Rearing for Food and Jobs) as a targeted effort to assist the private sector to engage in commercial agriculture. 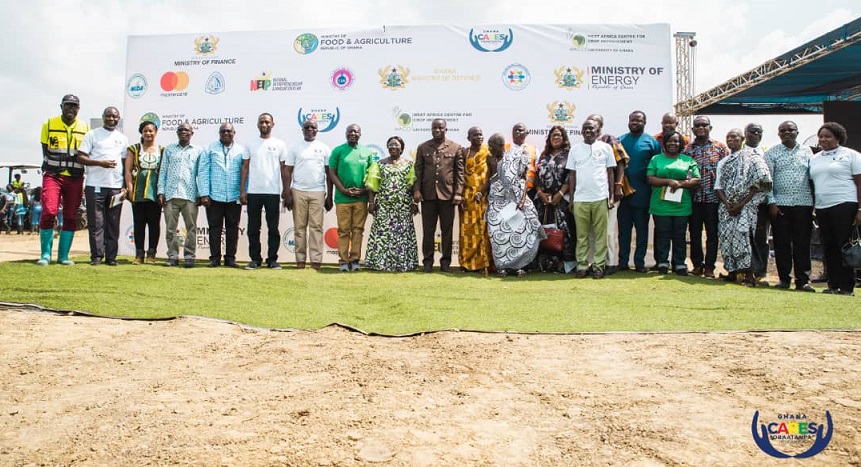 About 200,000 jobs (105,000 direct and 95,000 indirect jobs) are expected to be created by the EPP for unemployed youth, which would also provide them with a decent source of income, with beneficiaries undergoing a mandatory training on good agronomic practices in rice production, group dynamics and entrepreneurship.

Speaking on behave of the President, the Chief of Staff of Ghana, Akosua Frema Osei-Opare noted that, over the last few years, the Government had been charting a path to a Ghana Beyond Aid, but several overlapping malevolent forces, including the outbreak of COVID-19 pandemic, had viciously interrupted the pursuit of economic transformation.

"In fact, it would be unwise to keep supporting employment elsewhere by importing more when our youth continue to actively look for jobs here. It would be unwise not to allow the private enterprise to lead the transformation of our economy." the President added.

The First Gentleman of the land indicated that, the project, would help reduce imports, improve Ghana’s food security, and promote value-addition and accelerate infrastructural development and enhance market linkages in food growing areas.

Finance Minister, Ken Ofori-Atta, in his speech, described the programme as watershed moment in economic history and added that, the EPP through the Ghana CARES programme would provide a catalytic framework to holistically address the structural challenges in the economy by shifting Ghana from import-driven to a self-sufficient and export-oriented economy.

To this end, the Finance Minister extended Government’s invitation to individuals, private sector actors, organized groups, churches, traditional leaders, financial institutions who could secure or own 1000 acres and above, to come on board.

“We will provide support such as land development and facilitate access to credit, including the recently approved GHC 500million from the Development Bank Ghana” he assured.

The Minister added that, "This is a real and collective effort to replicate the images of the mass land of cultivated fields we see while flying over other countries that are characterized as the “food baskets” of the world."

He revealed that, the project would also help the country to improve its food security and enable it to eventually optimize the single market opportunities that the African Continental Free Trade Area (AfCFTA) offered.

The Minister for Defence, Mr. Dominic Nitiwul, on his part, said, when the Economic Enclave Project was sustained and extended to other parts of the country, Ghana would not only be in the capacity to produce more, but be self-sufficient and even export its produce.

Numo Moses Otutetey Akpakposu, the Father of the Kusanya Stool Land, lamented that farmers in Tsopoli and its surrounding communities often suffered a lot of post-harvest losses because they did not have access to mechanised processing and other facilities.

He was, however, optimistic that these challenges would be a thing of the past with the implementation of the EEP and called on all stakeholders to give it the needed support to improve the lives of farmers, traders and all actors in the agriculture value chain to earn more income.

The project is expected to be extended to the Greater Accra, Ashanti, Central, Western North, Savannah and Oti regions. END