“Indeed, ATI, through its service portfolio & product offerings, must play a central role in supporting the Continent's economic development. At the very least, we must work together to remove the unfair and "perceived" riskiness of investment opportunities on the Continent compared to those in the West” he advocated.

He made this call when he addressed a gathering of the ATI’s member countries and institutions, government officials and players in the financial market at the 22nd Annual General Meeting of the African Trade Insurance Agency in Accra.

The ATI was created in 2001 as a political risk provider and since its inception, it has become a much sought-after partner and continues to bridge the gap in proposals from sovereigns, investors, creditors, and suppliers. 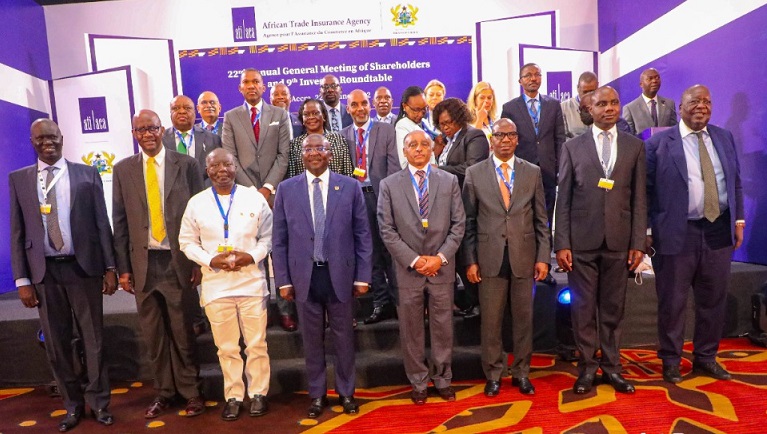 According to the Minister, the ATI story had mirrored that of the African Continent for the better part of two decades and explained further that “amid greater political and macro-economic stability, the 2000s represented the period where Africa finally managed to shake off the deep "pessimism" that had dominated the headlines for most of the 80s and 90s. The numbers suggest that between 1980-2000, the average GDP growth on the Continent was a mere 1.8%. Between 2001-2021 however, that average increased markedly to 4.1%.”.

At the end of 2021, he disclosed that, ATI had USD 585 million in funds under management, with 93% of the Agency's investments A-rated by Moody's, S&P and Fitch and called on the Multilateral development Agency to “facilitate the development of trade, investment and other productive activities across Africa”.

Mr. Ofori-Atta highlighted one of ATI's significant contributions at the start of the pandemic, when it provided an Agribusiness & Food Company in East Africa with a facility that allowed the company to sell wheat to seven African countries at competitive rates for a transaction value of USD 11 million, while also protecting the company against non-payment risk.

Such support for fortifying food supply chains, he asserted, must continue to be a feature of ATI's activities, particularly with the operationalization of the African Continental Free Trade Area (AfCFTA), which creates a single market for goods & services.

Touching on the war in Ukraine, he stated that, the continent could not afford to be complacent about creating the right conditions for food security and trade growth.

The Board Chairman of the ATI, Dr. Yohannes Ayalew Birru in his statement said that, the ATI was standing on solid financial and operational footing, despite unprecedented global headwinds that threatened to slow down corporate and global economic recovery last year.

“ATI has surpassed the previous year’s performance in all the areas of its financial assessment, including gross written premium and volumes of contracts underwritten” he disclosed.

Dr. Ayalew Birru went on to state that, ATI’s Credit Ratings by both Standard & Poor’s (S&P), and Moody’s Rating were affirmed at A/Stable and that S&P had reaffirmed ATI’s rating at “A”/Stable Outlook in April this year, while Moody’s assigned A3/stable Outlook rating for both ATI’s Counterparty and Insurer Financial Strength Ratings, in October last year.

These ratings, the Board Chairman acknowledged, reflected the significant expansion of ATI’s shareholder base, its solid record of Preferred Creditor Treatment (PCT), and the development of superior risk management capabilities.

“We will continue to ensure that the actions of the Board and those of the Management are governed by ATI’s values and principles, and that this is reinforced at all levels within the Organization”, he emphasized.

These contributions, which included capital enhancement for Benin, Ghana, Côte d’Ivoire and Madagascar, and new equity for the membership of Cameroon, Senegal, and Togo, resulted in an overall increase in ATI’s equity by 26%.

The Chief Executive Officer of the ATI, Manuel Moses also added that, the ATI’s financial results for 2021 reflected sustained year-on-year improvement in our financial indicators, despite the profound effects of the COVID pandemic on businesses globally.

He asserted that, “In light of the recent global developments, including the Russia - Ukraine conflict, we stand ready to safeguard our capital and to ensure that our financial performance is not adversely affected”.

According to Mr. Moses, the Agency had spent time in the past year to improve its organizational efficiency to counter external shocks, and cope with the growth in its business, as it entered the third decade of our operations.

These included enhancing its digital infrastructure with a view to improving underwriting and operational efficiency, beefing up staffing in critical areas such as corporate compliance and Environmental and Social Governance, building capacity to help with the implementation of IFRS 17 Insurance Contract reporting and revamping Enterprise Risk Management Framework (ERM) as well as adopting a new framework that better integrates risk management within the entire organization. END