Accra, 8th November, 2021 - Ghana’s Finance Minister, Ken Ofori-Atta has given the assurance of the country’s preparedness to host the next Annual General Meetings of the African Development Bank Group next year.

He made this known when he, on behalf of Government signed a Memorandum of Understanding (MOU) with the Secretary General of the African Development Bank Groups, Prof. Vincent O. Nmehielle towards Ghana’s hosting of the Bank’s meetings in Accra next year.

Prior to the signing of the MOU between Ghana and the Bank, a delegation from the Bank’s Head Office in Abidjan, Côte d'Ivoire, as part of preparatory meetings came to assess the country’s hosting facilities. The delegation toured selected health facilities and hospitality and accommodation facilities earmarked for the Meetings.

“It is re-assuring to note that the Team on the Mission has been satisfied so far with the general preparedness of our country, and today’s MOU signing is yet another demonstration of our enduring commitment to the 2022 AGM”, Hon. Ofori-Atta noted. 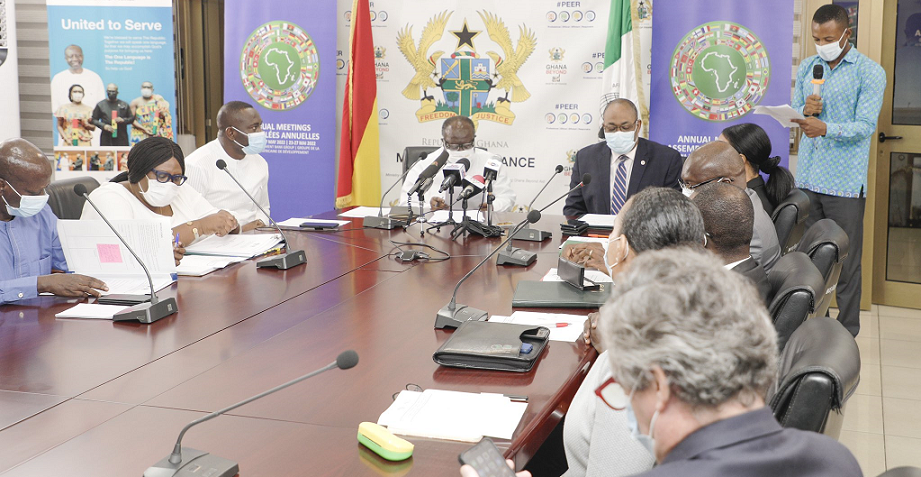 The Minister alluded to the numerous challenges confronting the African continent and hinted that the 2022 Annual General Meetings would afford the opportunity for delegates and the Bank to strategize and advance the cause to recover and build forward better.

Over the past 18 months, the Minister noted that they had called on the IMF to on-lend at least USD 100 billion of its new $650 billion in special drawing rights (SDRs) to Africa, advocated for the establishment of an African Liquidity and Sustainability Facility (LSF) to protect the continent against external shocks.

Others included, leading the charge for developed nations to end vaccine nationalism, and rather work to ensuring COVID-19 vaccines are given to at least 60% of the African population; and advocated for resourcing the AfDB to position it as the catalyst for Africa’s economic advancement.

Despite the gains made, Mr. Ofori-Atta indicated, however, that a lot needed to be done going into the 2022 Annual Meetings, as Africa was still in the eye of the “proverbial storm”.

To buttress his points, he gave the figures of recent estimates which showed that about 38.7 million more Africans could slide into extreme poverty in 2021 (AfDB, 2021), Africa’s external debt increased by some $37 billion, from $665 billion in 2019 to an estimated $702 billion in 2020 (World Bank). In addition, 103 million jobs (corresponding to an average income loss of 10.7%) had been lost.

“African countries need at least $4.3 trillion, or $175 billion a year, to finance infrastructure projects that support economic growth; climate threat which threatened to cost the continent $7-$15 billion annually, although we account for less than 4% of global greenhouse gas emissions and receive just 5% of total climate finance outside the OECD (UNECA)” , adding that Africa needed to also vaccinate at least 900 million people to reach WHO mandated 70% herd immunity”.

The Secretary General of the African Development Bank Group, Prof. Vincent O. Nmehielle on his part revealed that on 13th November 2020, the Government of the Republic of Ghana and the African Development Bank Group signed an MOU for the hosting of the 2021 Annual Meetings, with the hope that the health situation would have allowed for physical Annual Meetings.

The Meetings format was, however, changed from physical to virtual due to the persistence of the COVID-19 pandemic.

“I am therefore pleased that we are here today, once again, for the signing of the MOU, which will pave way for the two parties to officially commence the preparations for the 2022 Annual Meetings, Hon. Minister”, Prof Nmehielle stated.

The ceremony was attended by a Deputy Minister for Finance, Hon. John Ampontuah Kumah, Officials of the Ministry of Finance and the delegation from the African Development Bank office here in Ghana and Abidjan, Côte d'Ivoire. END