Accra, 27th August, 2020 - Ken Ofori-Atta, Minister for Finance at a press briefing today said the Agyapa Mineral Royalty Limited arrangement was the best deal for Ghana’s gold. Government, he revealed was excited about the listing of Agyapa Royalty Company in London as the first royalty company of that nature in Africa.

The Finance Minister bemoaned the situation where a country like Ghana that had mined gold since the 15th century with the Portuguese could not boast of any international listed company either in gold or in cocoa. 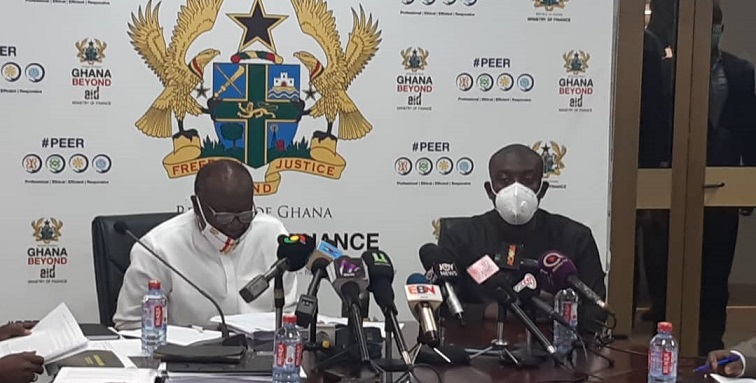 To critics of the transaction, he wondered why it was acceptable to borrow today for the future and not good to use the nation’s resources to leverage our assets for tomorrow?

Again, he asked, why it was acceptable for the foreign investor who held a concession to sell the natural resources in the ground upfront and Ghana could not do same?

Giving an overview of the transaction, he stated that, for centuries the country had not benefited much from its natural resources all because value extraction ended at the point these resources left the shores of the country.

“The largest increase in value of these raw materials occurred when they leave the shores of Ghana and were converted into refined products or monitizeable securities”, he stated.

He added that the H E the President was clear in his mind that there was the need to add considerable value to what the country produced and traded in terms of the nation’s resources in order to achieve the ‘Ghana Beyond Aid’ we so desire.

“We all fail to see the value we desire because when we assess the effectiveness of our policies and legislation, we limit the extent of our expectations to the national borders, we take no interest in what happens to our resources when they leave our shores” Mr. Ofori-Atta observed.

“The desire to domesticate our expectations when operating in a global markets adds to hurt and limit developing countries and the NPP government is determined to break our economy free from these old boundaries”, he stressed.

He acknowledged the need to create the enabling structures that allowed the nation to access the funding of oil, cocoa, and gas and further added that other companies with access to capital to invest in our economy were not limited to public institutions.

Mr. Ofori-Atta quizzed that, if a foreign investor could use coverable reserve in our country granted to them by the nation to raise money which they chose to spend anywhere, why could the country not do same to maximize its benefit and expand the economy?

A Deputy Minister for Finance, Hon. Charles Adu Boahen in a power point presentation took the gathering through the Agyapa Royalty Transaction and started by saying that the transaction was novel in this part of the world.

He disclosed that the Agyapa royalty was a gold royalty company and its main purpose was to offer financing to gold mining companies that wanted to develop new mining projects in exchange for royalties or revenue once the mines started producing gold.

The rational for the transaction, Mr. Adu Boahen noted was to create and launch Africa’s first gold royalty company and showcase Ghana as the premier destination for gold assets and resource mining, whilst raising non debt funding for capital investment.

This he noted was a sure way to attract investment into the sector, increase exploration activity, provide financing to owners of mining concessions looking for equity type of financing to develop their mines and bring them to production as well as ensure rural development.

Income from this transaction would be used in four main areas, health, education, road infrastructure and housing. Mining communities would be prioritized to benefit from these projects. Part of the proceeds would also go to support the new National Development Bank as well as the Ghana Infrastructure and Investment Fund.

He added that the company which was to be listed on the London and Ghana Stock Exchanges was owned entirely by the Government of Ghana and once listed, Government of Ghana through the Mineral Income Investment Fund (MIIF) would be the majority shareholder with at least 51% of the shares.

On the name change from Asaase to Agyapa that had raised a number of issues in the media space, Mr. Adu Boahen said, upon recommendations of the Transaction Advisors, they needed to have a subsidiary company in Ghana where the royalties would be deposited before being transferred abroad.

“So Asaase Ghana limited was suggested to be the name of the subsidiary company in Ghana, however, the team realized at the time of registering the subsidiary name in Ghana that a number of companies including those engaged in mining had already registered their company’s name Asaase”.

This the Minister noted, necessitated the change of name from Asaase to Agyapa Royalty (from Agyapade3 meaning inheritance) to retain its Ghanaian identity and personality and for easy pronunciation by the international business community.

Hon. Charles Adu Boahen ended by appealing to Ghanaians to rally behind the Government in this transaction as the deal was not shrouded in secrecy, but very transparent with the good people being the beneficiaries.