Minister for Finance, Hon Ken Ofori-Atta has held a stakeholders meeting with the President and some members of the Association of Ghana Industries (AGI) to deliberate on issues affecting the manufacturing industry in the country.

The Association of Ghana Industries (AGI) is a voluntary business association of over 1200 members, made up of small, medium and large scale manufacturing and services industries in agro-processing (food and beverages), agri-business, pharmaceuticals, electronics and electrical, telecommunications, information technology, utilities, service industries, transport, construction, textiles, garments and leather, banking and advertising. 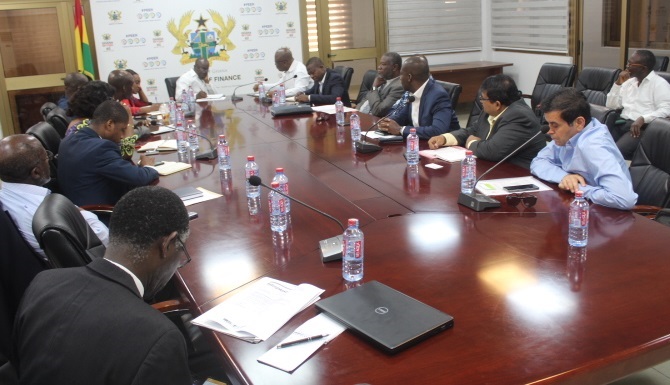 The Minister in his welcome statement noted that meeting of such nature affords the Government the opportunity to have first-hand information on how its policies and programmes were felt by the very people they were intended for.

He added that the Government had initiated a number of policies and social interventions that would in the not too distant future turn the Ghanaian economy into an export led economy that thrived on vibrant manufacturing industry.

“Government has keen interest in creating channels and recognizes social collaboration as a vehicle for structural change and the Ministry of Finance promises to be the cutting edge of the structural change going forward”. Mr. Ofori-Atta stated.

Ghana’s current account, the Minister regretted was not sustainable hence, the need for engagement with the private sector on how to change the narrative from import economy to import substitution one.

Touching on creating channels to address all challenges, he stated that for the first time in Ghana’s history, Ghanaian employers and workers had been given a seat around the decision making table through collaboration with its social partners. This, he said, was to allude to the fact that Government was ever ready to engage any institution or group of persons on developmental issues.

The President of the Association of Ghana Industries, Mr. Yaw Adu-Gyamfi after expression his gratitude for such open and frank platform for deliberation, noted that it was expedient for Government’s policies to cater for the local content.

“Government must address the local content issue that would enable Ghanaian businessmen and Ghanaians in general have the opportunity to live the dream of enjoying their work”, he noted.

The President, who is also the Chief Executive Officer of Danadams Pharmaceuticals, further lamented the situation where expatriate drivers where brought to drive trucks for companies working in Ghana to the neglect of Ghanaian workers.

“During bilateral agreements with other nations, do well to factor the local content issue in such contracts so it becomes binding and prevents the other parties from securing services elsewhere” Mr. Yaw Adu-Gyamfi advised.

He charged the Government to as a matter of urgency step in to address the many challenges that were crippling the local content, which included the unhealthy competition with foreigners who were involved in businesses reserved for Ghanaians and the issue of high taxes.

Advocating against policies that retard the growth and development of industries, Mr. Adu-Gyamfi called on government to reconsider the reduction in Benchmark value of import duties by 50% at all of the country’s ports.

A member of the AGI called on Customs Division to educate Ghanaians on the application of the benchmark policy at the ports, as many importers had not really come to terms with the processes involved in the benchmark issues.

To curb the growing menace of plastic products in the system, it was suggested that a certificate of analysis be conducted on all imported products to know the plastic content and add a 10% tax to it.

After taking turns to throw more light on their manufacturing companies and the challenges they currently faced, the Minister of Finance gave the assurance that their grievances would be critically looked at.

Present were, the Deputy Ministers for Finance, Hon. Kwaku Kwarteng, Hon. Charles Adu Boahen, and Hon. Abena Osei-Asare. The Chief Director of the Ministry of Finance, Mr. Patrick Nomo, the Coordinating Director (Technical), Ms. Eva Mends, and some Directors of the Ministry as well as some members of AGI. END